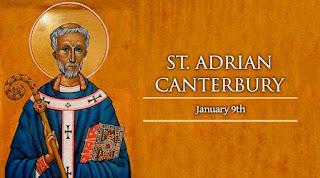 
Saint Adrian had become a monk at a young age, not far from Naples. He became a valuable advisor to the Pontiff and 3 years later, Pope Vitalian wanted to appoint Adrian as Archbishop of Canterbury.  He refused but suggested firstly Andrew from a nearby Abbey, who refused due to his age, then Theodore of Tarsus.  Vitalian accepted this suggestion on condition that Adrian accompanied Theodore as advisor which he accepted.  The two set out from Rome in May 668.  After spending some time in France, Adrian arrived in England at the end of 669. Adrian became Abbot of the monastery of St Peters and St Pauls almost immediately. Adrian was known to be an excellent administrator as well as learned in the bible and Greek and Latin.


Several hundred years after his death, his body was found to be incorrupt, following renovations at the church.  His tomb became famous for miracles, many of which were prayers granted in favour of boys who were in trouble with their teachers at the monastery.