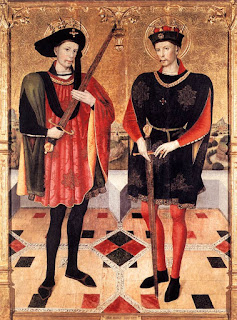 
Decius the Emperor had conquered Babylon and the surrounding areas.  On finding Christians in the city, he took them to Corduba and killed them by various torture methods.  Abdon & Sennen, Persians who had converted to Christianity, were Governors of the area, and they buried the bodies of the slaughtered Christians. Abdon & Sennen, were soon discovered to be Christian and taken, bound in chains to Decius in Rome. Decius ordered them to make a sacrifice to a Pagan God of which they refused to do, and instead spat at the idol.


They were taken to the Colosseum and put in with wild lions and bears.  The wild beasts however, refused to touch them, miraculously becoming tame. They were instead beheaded by the not so tame gladiators, to the delight of the Senate.  Their remains were left by the Son God for 3 days.  They were then hidden by Quirinus, a fellow Christian who preserved them until they were taken to Ponziano.  It is thought that the Martyred Saints had revealed their remains whereabouts by a miraculous revelation.


The Saints are now at rest in the Basilica of San Marco, in Rome