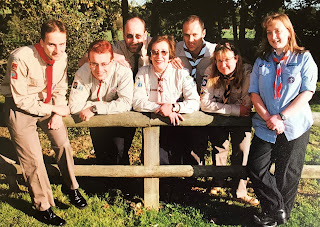 
When my daughter, Pippi, was about 15 months old, we went to a school fete.  While minding our own business, we were approached by a man asking if we would like to get involved with the Scout movement as they were looking for a Scout Leader.  I am not quite sure how it happened, but I managed to say yes!  I knew nothing about Scouting really, I had been a Brownie and a Guide, and we had met up with Scouts on camp, but otherwise had no idea. In those days Guides learnt to sew. Anyway, there were only a couple of Scouts, so how hard could it be?


I went through the interview and DBS process and started in my role as Scout Leader with a parent help called Nigel.  Not long after this, we were due for the Cubs who were reaching the age of Scouting to move up, which they did, and I got another few parent helpers which made my life so much easier.   I felt that as Scouts, we should be trying to get the young people to experience as much as possible, so before I knew it, we had activities planned for a lot of weekends – especially during summer.  If course, by this time it was a mixed boy/girl group.


We had Backwards courses, which were always really good fun … the ones for adult training were even better, and copious amounts of homemade wine were drunk on those. We went sailing a couple of times from Plymouth in a 40ft yacht, we went canoeing, camping, to the activity centres locally, and joined other scout groups around the Country for different events including a visit to Brownsea Island – the original home of Scouting.


What had started with 2 Scouts soon blossomed into 18 Scouts.  I have a lot of fond memories of camps and activities although I did feel that people were starting to avoid me as I was always after something from people … like bricks to build a barbecue or pledges for auctions.


We had two Scouts qualify for the World Jamboree in Thailand which was a fantastic opportunity for them.  This meant we had to quadruple our efforts in fundraising, and had fun setting up fetes, fancy dress evening, homemade wine tasting and lots more.


I think I enjoyed a lot of the activities more than the scouts – it was an opportunity for me to try things for the first time.  The regular parent helpers were great, one mistake was arranging for a local company to come with snakes, spiders, and other creepy crawlies.  I did try to be brave, but my first instinct was to leg it out of that room quicker than I was capable of!


I would certainly recommend Scouting to young people – there are so many opportunities available to learn new skills, and to try different things.
labels Other Stories