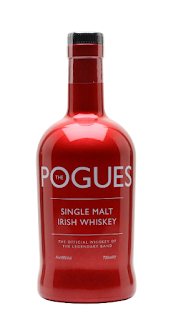 I am a sworn friend of Scottish (Traditional) Single Malts.  I have been drinking Single Malts for around 25 years and having worked in Scotland many times over many years, have managed to try lots of different single Malts, as well as visit several distilleries..  However, I recently discovered Irish Single Malts. It started with Connemara which I will blog about at a different point but wanted to start with my latest discovery, fast becoming one of my favourites – and that is Pogues Irish Malt Whiskey.

From the Pogues Whiskey website – “When the legendary Celtic punk band The Pogues put their heads together with the equally legendary whiskey maker Frank McHardy in West Cork, there was no doubt they were going to create something unique.
And they did; the raucous spirit of the band fused with Frank’s craft and knowhow in the cool mesothermal microclimate for which West Cork is famous, resulted in an award-winning whiskey – a true Irish rebel.


But while The Pogues Irish Whiskeys are exceptional, make no mistake; they are not for sipping by the fireside. After all, if rules were broken in the creation of this golden liquid, then they must surely be broken in the drinking of it. So, here’s to the high times when joy abounds, mischief is made, and hell is raised”.
“Created by master whiskey maker Frank McHardy on the windswept Atlantic archipelago where the West Cork distillery is perched; this (The Pogues) exceptionally smooth Single Malt Irish Whiskey is aged in bourbon oak.


Breathe in, and you’ll detect a savoury quality, with the nutty aroma of toasted seeds, caramel brittle and chocolate-covered peanuts, and the tiniest hint of Parma violets. Taste woody spice and cinnamon followed by those chocolate-covered peanuts, sesame snaps, and a suggestion of nougat and marshmallow. And the finish; deep, mellow, and thoroughly satisfying.”
For me, the chocolate tastes cheer up any evening, making for an easy drinking, pleasant whiskey, at a reasonable price – around 23GBP a bottle.  Enjoy