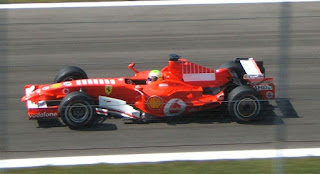 
My history with Formula One racing stems back to when I was working for Foundries around the UK.  One of our main clients were the Formula One and other racing teams.  Initially I was not that interested but then I was working for one of the companies supplying castings for Ayrton Senna’s car when he died in a crash in 1994.  Of course, this was big news and that sparked my interest in Formula one.


I met Nigel Mansell and David Coulthard at the Autosport show, where I had been working on a stand for a Foundry.  I also had a long chat with Stirling Moss about the F1 and the Indy engine we had on our stand, although I wasn’t aware until afterwards that I was talking with Stirling, when my colleagues said “You do know who that was don’t you” “What did you say?”.


By this time, I had been to Silverstone a couple of times to see Formula One.  Damon Hill was my hero, and because of his great rivalry with Michael Schumacker, I did not like Michael.  I had a signed photo from Damon that I had got from one of his race engineers and a few other bits of memorabilia.


Anyway, fast forward the clock to September 2006, my ex-husband and I went to Italy for the Monza Grand Prix.  We got flights from Bristol but then joined an organised group from the Midlands who had their own coach.  We flew into Milan and caught a train up to Lecco.  We were staying along Lake Como.


As always, race day had a fantastic atmosphere, Damon had stopped driving in 1999 and my favorite was now Jenson Button, a local Somerset boy.  He qualified and finished in 5th.  Schumacker had qualified in 2nd behind Kimi Raikkonen.  The race was exciting, and Michael finished in first place.  Being in Italy, the crowd was full of Tifosi – shouting excitedly for Michael and Ferrari.  They were delighted with the result; I was not so happy.


During the press conference, Michael announced his retirement, the Tifosa were disappointed, I cheered … which considering where I was sitting was a very brave thing to do – as I realised when I got glared at by almost everyone around me!.


Of course, Michael went back to Formula One 3 years later, and I cannot deny he was a great driver.  It was so sad to hear of his skiing accident.  I escaped the Tifosi unharmed though which was good.  The spectators at the Formula One’s that I have been to are great, very friendly and plenty of banter.


I have weaned myself off from being a petrol head, it was difficult to stay on top of when in Australia and now it is on pay TV – I can do without it but it was a big part of my life for several years.
labels Other Stories