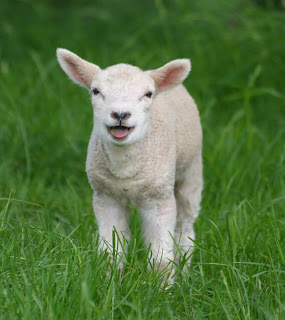 
One Easter time, around 2012, I stayed in a cottage for a couple of nights in Worcestershire.  It was a self-catering cottage on a farm.  That year was very cold, there was a lot of frost and daytime temperatures were single figures.


The farm was owned by a woman whose husband had died in the previous 12 months and she was taking care of the lambing on her own for the first time.  She had a Collie dog which I spent a lot of time throwing stones for and therefore got talking to the lady.


On the final morning, she seemed very stressed, so I asked her if she was OK.  She said it was so cold that the lambs that were being born, were dying within 10 minutes if she wasn’t able to get them in to the shed, and that there were so many being born that she was losing some.


I offered to help, which she gratefully accepted.  I was helping dress the lambs in little plastic coats, put them with their mums and feed them.  I loved those few hours that I was able to help.  It was of course a messy job and I looked like I had slaughtered a few sheep by the end of it, but it made my weekend.


The lady was grateful and kept thanking me, but I am sure I got so much more from it than I gave.  I did have to move some sheep from one field to another and this proved more difficult as they felt that the farmhouse would be a better direction … I got them all to where they needed to be in the end but do not think I will take up shepherding any time soon, but always happy to help with lambing.
labels Other Stories