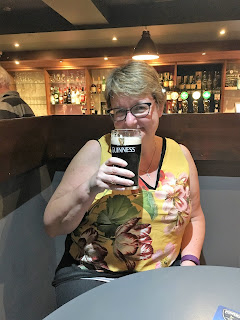 
Paul and I came over to the UK in 2017 for a holiday, as we did most years. This time we were also taking a few days in Ireland, mainly to catch up with Paul’s family.  We also took a couple of days to ourselves and decided to head to the West Coast.  We stayed in Liscannor, near Lahinch, in a hotel called the Cliffs of Moher https://cliffsofmoherhotel.com/.  It was a nice find as it turned out.  We were sitting in the bar on the first evening, having a drink and dinner, and a couple came in playing the violin and accordion.


Incidentally, I play the accordion, but Paul does not like it, so I rarely play now.  Anyway, it was a lovely atmosphere in the bar.  Paul was drinking Guinness; I was drinking red wine.  My only experience with Guinness was when I was pregnant, particularly with Ben and my iron was low.  The mid-wife recommended half a pint of Guinness.  I was working in The Castle pub in Bradninch part time at the time so was able to pour myself a half pint.  I could not drink it though … there was nothing in the taste that I could like.


As my last experience by then was 15 years previous, I did ask Paul if I could try some Guinness.  Now whether it was the atmosphere, the taste being different in Ireland, or some other reason, I liked it.  Let us just say, my iron should not have been low for the rest of the holiday.


I have drunk Guinness since but not very often, and it certainly would not be a drink I would choose first, but when we are next in Ireland, I look forward to trying it again.
labels Other Stories