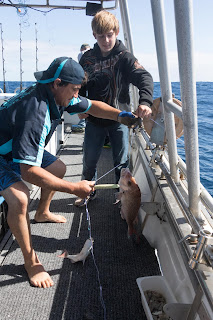 Ben, my son came across to Perth in August 2015 for a holiday, and we decided to go camping up North as far as Coral Bay and then inland to Karijini National Park.  The camping experience will no doubt be covered in a different post.  This post relates the story of deep-sea fishing.

Before the journey started, Ben had expressed an interest in trying deep-sea fishing.  We had taken him fishing for his 12th birthday on a previous visit to Perth.  I must admit that the idea of deep-sea fishing was not my idea of a good day out.  The previous day, we had seen two snakes and I was still suffering from that shock.  We had also seen a spiny lizard which had made my day. 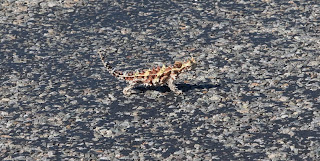 Anyway, while in Coral Bay, we went to the shops and one happened to be advertising deep-sea fishing, so we enquired further and before I knew it, we were booked on for the next day.  Paul and Ben were fishing, and I was spectating.  I secretly hoped that the trip might have been cancelled due to weather but no … the next morning we were off fishing for 7 hours.

I took a couple of seasickness tablets but think I spent most of the 7 hours feeling like death warmed up, especially when we were stationary, however, Ben and Paul were having a great time.  There were some experienced fishermen on the trip, and they helped Ben in particular to land a couple of fish which was great for him.  At one point someone landed a shark and they had to cut the rope as it was too big – an assumed Great White.  They also landed a small shark which they pulled in for long enough for us to see.

Everyone fishing was allowed 5 fish, so the experienced fishermen pulled in quite a haul.  We also saw a whale which was exciting.  In the area’s close to the shore, where the sea was as clear as crystal, we could see all kinds of fish. 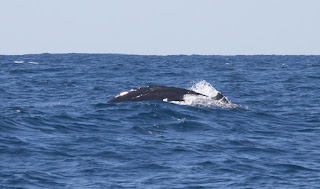 Coral bay has some great coral to explore, we did not get too much time to do so with the busy schedule we had which was a shame.  At the end of the trip I got off the boat and kissed the ground.  We then went round to the tables that had been set up where the fish were gutted and filleted.

As we were in tents and our only refrigerator was a cool box, we could not take the 10 fish we were entitles to but walked away with about 6 of them.  I wasn’t really that keen on fish until then but I have to say the fish – there were 3 types, snapper and red emperor where two, I can’t remember the third, were the best fish we had ever tasted.  They were so fresh it was amazing.  We gave same away but still ate fish for 4 days, and it was disappointing to come to the end of them.  Cooked on the BBQ – which was our only cooking method, they were amazing. 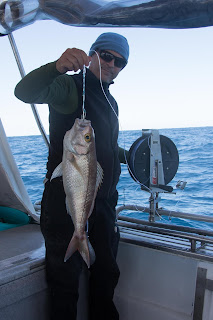 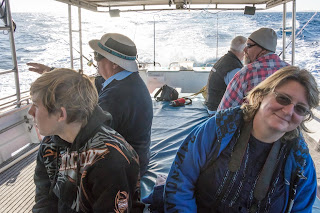 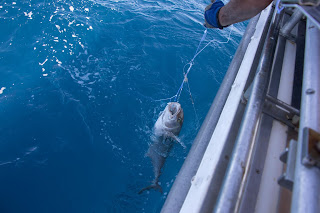 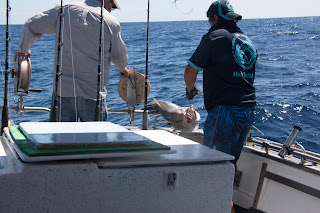 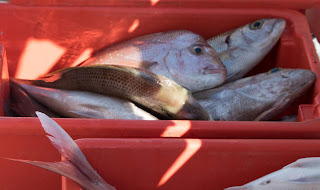 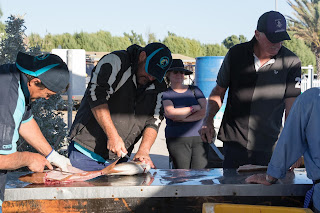