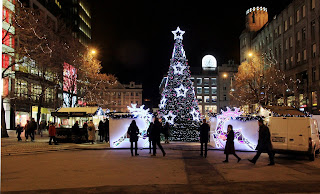 In December 2012, I took a trip to Prague to see the Christmas Markets.  The first thing I noticed was how cold it was, there was snow on the ground, and I had to go and buy a scarf and hat.  Having got over this shock, which was helped by finding the Christmas market in Wenceslas Square, which was serving copious amounts of mulled wine, I started exploring.

“Nicknamed ‘the City of a Hundred Spires,’ it’s known for its Old Town Square, the heart of its historic core, with colourful baroque buildings, Gothic churches and the medieval Astronomical Clock, which gives an animated hourly show.  Completed in 1402, pedestrian Charles Bridge is lined with statues of Catholic Saints.”

I was staying at a plush hotel http://www,alchymisthotel.com/en/home.html with an amazing spa and pool – although I remember the pool being a little colder than I like.  Just outside the hotel was a chocolate shop that sold the best hot chocolate ever … I went in there a few times to ensure the quality did not drop!

I had no idea about the traditional food of the Czech Republic but discovered that almost every meal involved duck and red cabbage, which was a sheer delight to me as I love both.  Alcohol was cheap – perhaps why Prague has become a bit of a Stag and Hen venue.  A bottle of sparkling wine, for instance, was less than 10GBP in the hotel.

Prague is a great place to explore, with all it’s history and architecture, I took a river boat dinner cruise with Jazz, a horse and cart ride around the city and even a massage, which was a lot cheaper than the equivalent in the UK.  The food and service in the hotel was superb. If I got the opportunity, I would certainly go back but probably when the weather was a little warmer – and I would love to see a performance at the Opera House. 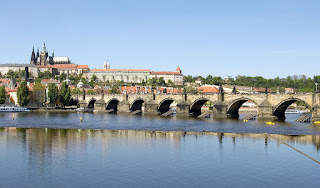