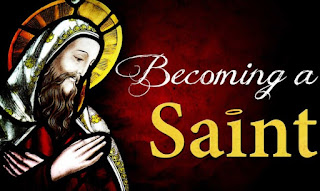 Becoming a Saint - The Process
Canonisation is the official process for declaring someone a saint.  Those Sainted are given a special feast day in the Catholic Calendar. The process was formalised in 1234. Before this time, those recognised as Holy and Martyrs were declared as Saints. Christianity was legalised in 313 by Emperor Constantine. Prior to this, tombs of Martyrs such as many of the Apostles were marked, so people could pay their respects.  The anniversaries of the deaths were placed on the local church calendars.  Shrines or churches were often built over those tombs following legalisation.

Before 1234, some figures of legend and even a drunken monk killed in a flight were Sainted. Because of this Pope Gregory IX established a procedure to investigate the life of potential Saints and research any attributed miracles.  These procedures have been revised and improved by several Popes since.
The process now starts with a “Postulator” – a person or group of people promoting the cause of a Saint – at this stage called “a servant of God”.
The “Servant of God’s” life is investigated, with witnesses interviewed and any writings examined, to ensure they lived their lives with enough virtue and holiness. Investigations usually wait 5 years until after their death to allow for emotions to decrease. The Pope can reduce this time – as with Saint Teresa of Calcutta for instance, although often this process takes much longer than 5 years.


The evidence will be scrutinised by the ‘Congregation for the Causes of Saints’ and, if approved, will be passed to the Pope.
Beatification, the next stage, needs a miracle attributed to prayer after the death of the candidate.  If these miracles are granted and this can be proved by medical practioners i.e. no medical evidence to show how the cure was attained, then it is assumed that candidate is already in heaven and therefore able to intercede with God. Once these miracles are verified, the candidate is given the title “Blessed”.
Note: Martyrs do not need a miracle attributed to them to be beatified.
To reach Canonisation a second miracle needs to be attributed to prayer.  Besides miraculous healings, other phenomena are also considered


Odour of Sanctity: The body gives off a sweet smell


Incorruptibility: The body does not decompose, even after a long time dead


Liquefaction: Dried blood of the Saint miraculously liquifies on their feast day


Canonisation usually takes place at the Vatican but can occur in a meaning place to the Saint – for example Juan Diego’s Canonisation (Our Lady of Guadalupe) took place in Mexico.