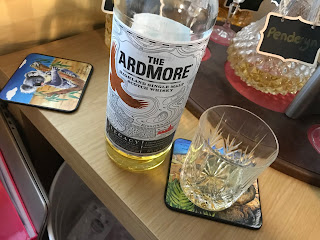 
I first tried Ardmore about 12 years ago during a trip to Aberdeen – possibly in the Grill – a traditional pub on Union Street in Aberdeen, offering a huge selection of Single Malts https://www.thegrillaberdeen.co.uk/# (my kind of pub).  Up until relatively recently, women were not allowed in the bar.  When they were allowed in, the men’s toilet got changed to the lady’s toilet and the men now must go outside.


Ardmore Legacy is a well-balanced, easy drinking whiskey with slight sweetness and a lingering spicy after taste.  Its an inexpensive whiskey and worth having in the cupboard.


Here is what Ardmore have to say about it with their tasting notes. “The Ardmore Legacy celebrates the distillery’s unique location on the fringes of the Highlands, offering a lightly peated liquid that is sweet and uplifting. The gentle flavour fully captures the essence of this spirit’s stunning Highland home. The Ardmore® Legacy will appeal to experienced peated malt drinkers and newcomers, alike”
Colour - Light golden.


Palate - Creamy vanilla spice gives way to more overt smoky charcoal notes, especially with the addition of water. Smoke doesn’t dominate and is balanced by the sweet honey and spice flavours.